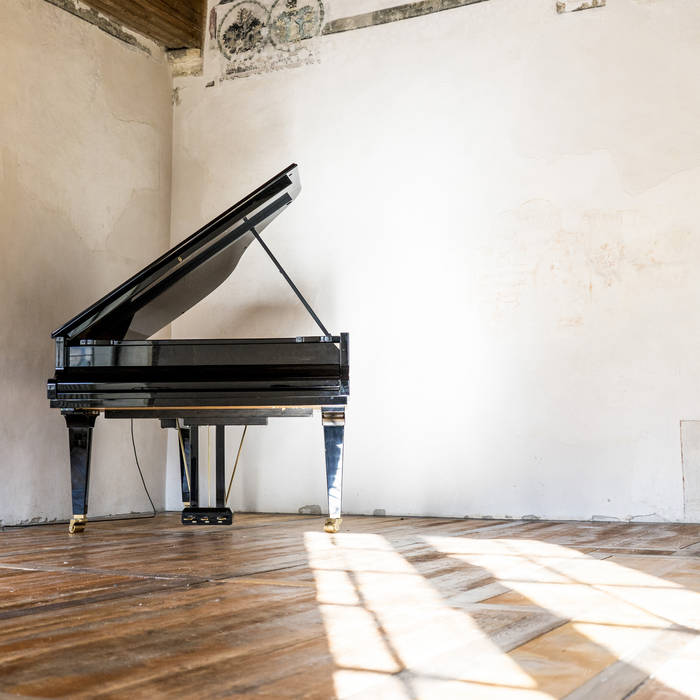 Simon is informed that the grand piano in his studio space needs special attention. To preserve the wood of the instrument and prevent it from drying out, it requires ‘watering’.

While investigating the small Swiss city, it becomes clear that the mountain stream that runs through it can be heard everywhere. Recordings were gathered to be used as inspiration and source material for developing a work.

The sounds were played into the space through transducers attached to the piano, a broken acoustic guitar, an iron door, a metal fireplace, a stool and a tube of cardboard all found in the studio space. Each of these was recorded and the recordings subsequently played back through the materials of the objects, á la Alvin Lucier.

These sounds were then played through a vibration motor that rested on the strings, causing it to move and jump erratically, ‘playing’ the piano. In turn this sound was recorded and then fed through each object, following the playback and record process once again.

This work, in 3 parts, is a composed version of the process, charting of the development of ‘Watering the Piano’, which was presented at Arc Artist Residency as a 6 channel installation in May 2016. Each object was documented with a variety of microphones and recording positions to capture many aspects of the resonance.

Simon would like to thank Sally De Kunst, Carlotta Jaquinta and all involved in and around Arc Artist Residency, Gregory Büttner, Francisco Meirino, Lavinia Raccanello and Hennrikka Kontimo, and lastly Richard Chartier and LINE for publishing the work.