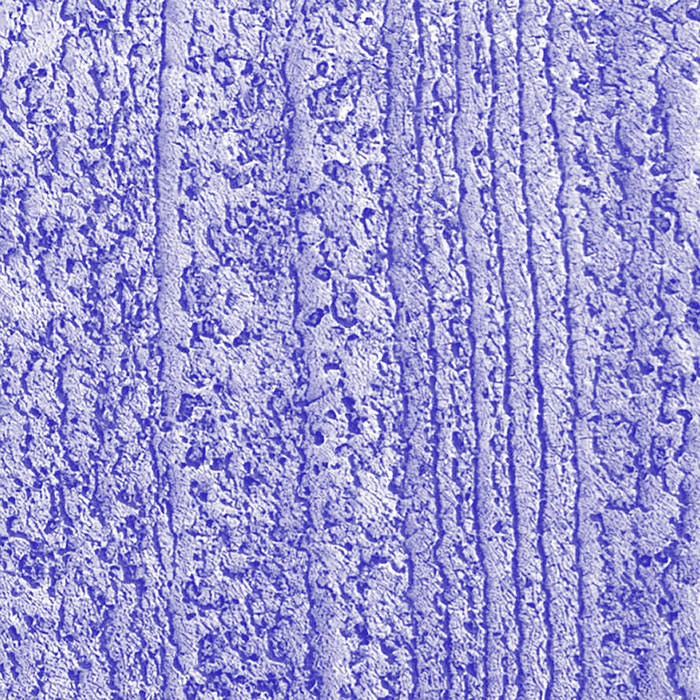 An experiment in highly restricted and minimalist synthesis, quasi-ritualistic repetition of sounds and phrases break down and reappear as Scrape proceeds, a landscape of sound materializing. Scrape is as influenced as by the risks and pleasures of communicative austerity in literature, such as in Samuel Beckett’s late texts (especially ‘Lessness’, a text where Beckett purposefully banishes sound; the phrase ‘no sound’ employed eighteen times, and none of his words permitting any obvious phonaesthesia or onomatopoeia), as it is by the works of composers such as Iannis Xenakis, Luigi Nono, and Pierluigi Billone. Inverting Beckett’s approach in ‘Lessness’, even the word of the title, ‘scrape’, is positioned in phonaesthetic contrast to the music’s subtly punctuated gliding waves of synthesis, bringing to mind sounds that are not heard but might be made resonant precisely by their sonic absence.


"He will go on his back face to the sky open again over him the ruins the sand the endlessness." — Samuel Beckett, ‘Lessness’

Emile Bojesen (b. 1985) is a sound artist and academic based in England, between London and Winchester, having grown up in Watford and on the small Danish island of Møn, as a neighbour to the composer, Henning Christiansen, in the village of Askeby. He conducts research on the history and philosophy of education, especially in its more radical forms, and is engaged in compositional practice comprising of experiments, improvisations, and collaborations in primarily acousmatic music. He is particularly interested in the creative and pedagogical practices emerging from or in relation to Black Mountain College, the BBC Radiophonic Workshop, Groupe de Recherches Musicales, Fluxus, and the Darmstadt School. Performing in bands from age of thirteen, Bojesen has released more than a dozen records, including on his newly established label, Hoopoe Industries. He recently published the book, Forms of Education: Educational Experience Against and Outside the Humanist Legacy (New York & London: Routledge, 2020).

All music & mastering by Emile Bojesen.

I am grateful for the support of Richard Chartier, Mike Wright, Ansgar Allen, Amy Parker, Steve Robotham, and Edoardo Cammisa.