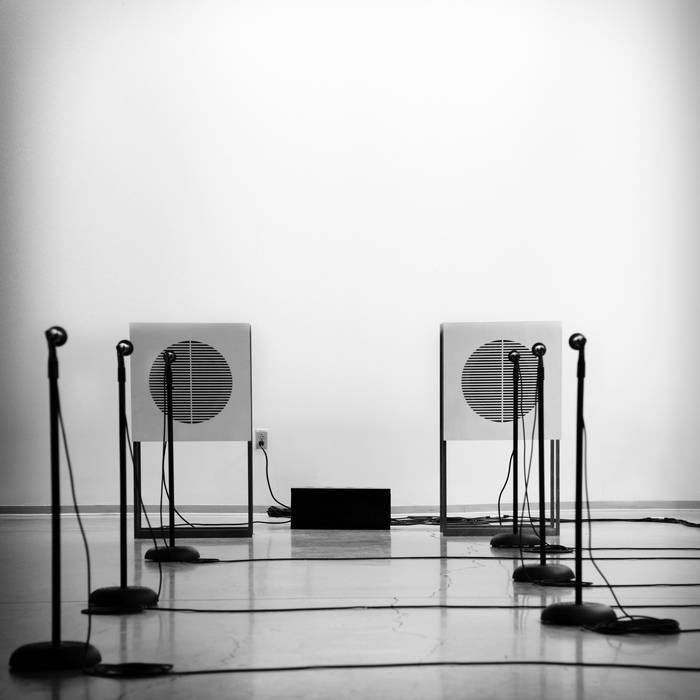 D.Jos After first listen, without reading any background of this work, the sounds seem rather unimpressive... However, when reading about how this project came to fruition, the artistry became evident and rather profound. If you enjoy sound art, this recording is a must!
Beautifully mastered by 12K, Taylor Duepree.
falling for L-NE... thanks r Favorite track: overture + part 1.

Six Microphones is a site-determined composition of audio feedback by designer and composer Robert Gerard Pietrusko, which explores the mutually constitutive relationships among sound, space, and audience. This recording is excerpted from a 2013 installation of the piece at Storefront for Art and Architecture in New York City.

Six Microphones is an attempt to create a composition with its own agency. The artwork senses and responds to its environment in a deeply embodied way—it contains no representational model of music or of space. Instead, the system uses sound to stabilize a set of internal homeostatic parameters that are held in a state of resonant feedback within an architectural space. A listening audience is confronted with a dynamic system that is very simple, yet approaches the cusp of intentionally, or even intelligence—a thin edge that may inspire within listeners new and productive forms of empathy.

Installed, Six Microphones illustrates the simplest and most legible diagram of feedback—a microphone pointed at a loudspeaker. The piece transforms the gallery from a space in which sound simply propagates, to the medium required to bring sound into being. While not site-specific, Six Microphones is fully site-determined: no sound is generated, it is only amplified. All tones and modulations produced during a performance emerge from the continual interaction between the system and the space itself. This is primarily dependent on three elements: (1) the composition as it unfolds in time, implemented as a changing combination of microphone amplitudes (2) the geometry and materiality of the space in which the system is sited, and (3) the presence of listeners within the space. Though the structure of the composition remains the same from one performance to the next, the acoustic result is contingent on the complex interaction of these three elements and cannot be anticipated beforehand. As such, there is no “intrinsic” or “original” version of the piece that exists independent from its spatial context. Nor is there a version of the piece that is independent from the system’s struggle with context—it is a process of spatio-musical becoming.

Robert Gerard Pietrusko is a designer and composer living in Somerville, Massachusetts. His work is part of the permanent collection of the Fondation Cartier pour l’Art Contemporain in Paris and has been exhibited internationally at venues such as MoMA, SFMOMA, ZKM, Akademie der Künste, Palais de Tokyo, and the Venice Architecture Biennale. Recent residencies ZKM (2011), EMPAC (2011), and the MacDowell Colony (2019). Pietrusko is currently an Associate Professor of Landscape Architecture at Harvard University.