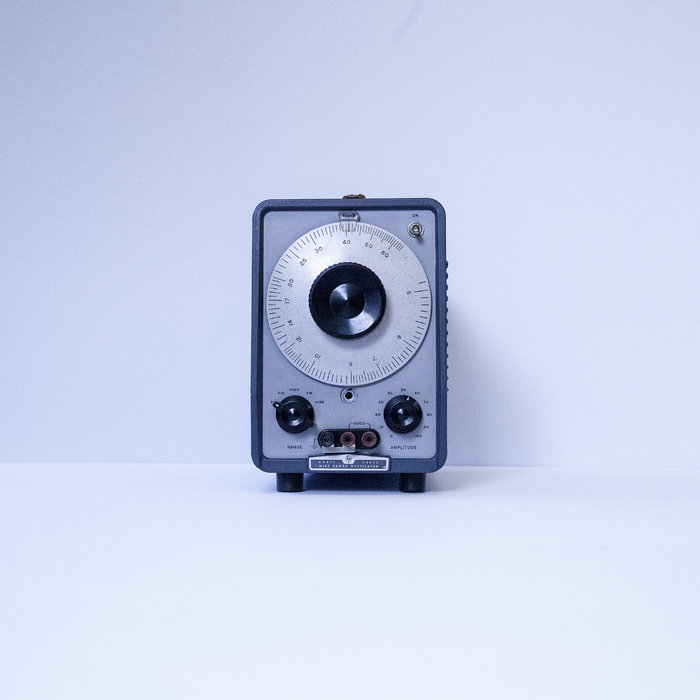 tautegory I never thought of sine wave compositions as performative but this provides an interesting counterpoint to works mediated by computer.

THE CRUX OF SONIC MATTER: A MUSIC FROM SINE WAVES
When Nicolas Bernier first told me about the collection of old oscillators he had been accumulating for years, I wondered what kind of project would develop from it. It took years for these oscillators to find their place within Nicolas’ research. Accumulating quite a few of these instruments over the years, perhaps he realized that he could not play them all himself. Following the idea of curator and author Hans-Ulrich Obrist, who said “the connections and principles that produce a collection contain assumptions, juxtapositions, findings, experimental possibilities and associations. Collection-making, you could say, is a method of producing knowledge”: the Ensemble d’oscillateurs was born.

Much to my excitement, Nicolas approached me to assist him in making the whole thing possible: connecting the oscillators, designing practice exercises for performers to master their "instrument", brainstorming staging possibilities for concerts, developing a method of notation for compositions, listing characteristics and parameters of each oscillator, and so on.

Back then, it was uncertain what sounds would come up of ten sine waves played by ten performers. The purity and simplicity of each signal, mixed with the imperfections of these old oscillators, led nonetheless to a level of complexity reachable by accumulation.

As the first composer who had the chance to compose for the ensemble, I had the chance to have the keys of the studio where the oscillators were kept. I spent hours there, alone, going back and forth between the oscillators, notating each adjustment, each manipulation, and imagining how one sine wave—one thin line—can become surrounded by a cluster of moving lines, when the oscillators are simultaneously being manipulated by multiple performers. The main challenge was to make this information readable by performers the same way a classical music score would. I managed to come up with a simple way of notating the limited available parameters, while notating the usable flaws in several oscillators that I wanted the performers to recreate.

The ensemble then began weekly rehearsals for what became its first “commission”. Experiencing the interpretation of my score, along with feedback from the performers, led me to improve the notation. During these rehearsals, the ensemble also improvised by following a guiding software that I was programming: this main section of the piece allowed them to improve their playing, forced to respond quickly to the events proposed by the software, enhancing their listening, with Nicolas controlling the mixing mixing desk onstage.

Following Nicolas’ interest in primitive technologies, history of electronic sound and the evolutions of its aesthetic, the Ensemble d’oscillateurs became a laboratory in search of a sine wave aesthetic: the ensemble took an interest in pieces from the repertoire ('Jar Piece' by Pauline Oliveros, 1966), but also in graphic scores ('December 1952' by Earle Brown, 1952; 'SYN-Phon' by Candas Sisman, 2013). The latter, which closes this album, was actually not written for one specific instrument. A collective work has been accomplished around the interpretation (literally) of the graphic notation: assigning a line to an oscillator, while some others are shaping the sound of a circle or quickly stepping in to give a sonic life to an array of connected dots.

“Listening” is the key word for the Ensemble oscillator. An absolute control of the musical material is not the primary goal. Performers are indeed guided by notation but due to its nature of purity and simplicity, an active listening is required. Just like in musique concrète, it is the matter that makes the music; the accumulation of this matter is the music. Forcing a deep listening—a heightened awareness of the sonic environment, significant to Pauline Oliveros’ work and theory—the listener will necessarily perceive micro-changes, subtleties, and fine details. Even if the music of the ensemble is more gestural than drone music, a strong link does exist in the way of absorbing this music made of non-extravagant musical matter.

With the aim to create a repertoire made specifically for the ensemble, to forge relationships between the new and the old, and to explore new ways to make music with these old devices, two more composers were invited to write music especially for the ensemble: Xavier Ménard and Francisco Meirino. This album consists of performances of three pieces custom-made for the Ensemble, and one arrangement of a graphic score.

Being part of the creation of the Ensemble d’oscillateurs and composing its first piece was as challenging as it was stimulating. I could only foresee its potential back then. The work the ensemble has accomplished since is already significant. Following Nicolas’ vision, the ensemble has had workshops with some important artists like singer/saxophonist/director Joane Hétu, experimental DJ Martin Tétrault, producer Jean-Patrice Rémillard, and stage director Sébastien David. And this is just the beginning as already a lot of new projects are on the go.

With many interesting research-creation productions on the horizon, this unusual ensemble is certainly an exciting musical act to be followed.

Successive transfigurations of timbral states shaped by accumulations, substitutions, and abrupt fractures. An ongoing fusion-fission relationship between the ten oscillators, with chain reactions driving the music.

Francisco Meirino’s composition feels as though the end of the piece is perceivable from the start, just as the horizon: sine waves follow a path that seems to be known to us. In the process, oscillators sing and calmly respond to one another, following an inevitable slope.

Slowly gathering energy to prepare listeners and performers for a more agitated music. All of this to see the energy disseminate and fade to a pressured atmosphere. This might be what a storm would sound like in slow motion.

The music of constellations: lines scattering to compressed galaxies/sound clusters. Spheres growing and leaking sounds. A sporadic yet prominent dialogue between the lowest and the highest.

All tracks recorded and mixed by Nicolas Bernier in the digital music dept. of the Université de Montréal.
Mastered by Alexis Langevin-Tétrault.