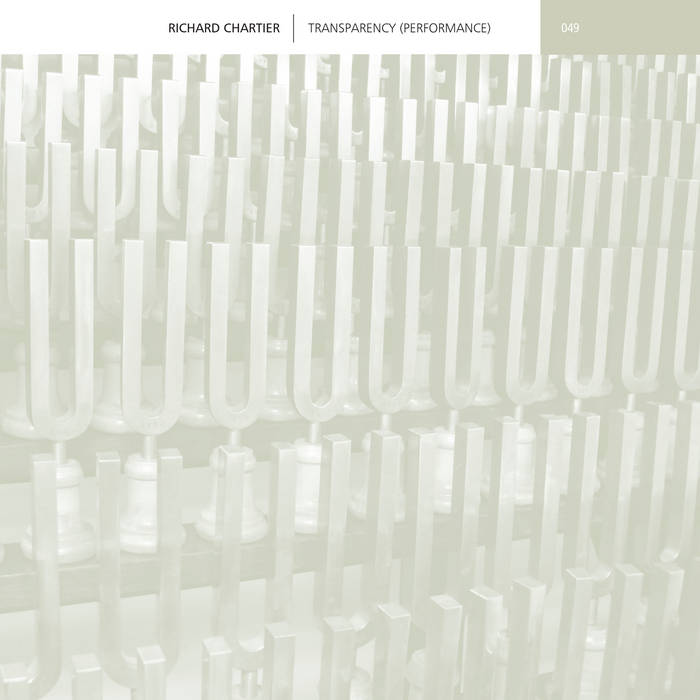 In 2010, sound artist Richard Chartier was awarded a Smithsonian Institution Artist Research Fellowship to explore the National Museum of American History’s collection of 19th Century acoustic apparatus for scientific demonstration. Chartier focused on the works of the German physicist Rudolf Koenig, including the Grand Tonometer (c. 1870-1875). This beautiful and precise set of 692 tuning forks expresses the frequency range 520 v.s (vibration simple)(260 hz) to 8192 v.s. (4096 hz). The pitches of the forks extend over four octaves, affording a perfect means for testing, by enumeration of the beats, the number of vibrations producing any given note. The Grand Tonometer is the only instrument of its kind in existence. During his Fellowship, Chartier individually recorded each of this unique instruments’ existing tuning forks as well as many other instruments, devices, and their tonal interactions.

Rudolph Koenig considered the Grand Tonometer and his other creations to be purely scientific instruments. His precise workmanship extended the Grand Tonometer’s range to frequencies across the field of human perception, thus allowing the listener a chance to witness the nature of sound itself. Chartier’s own compositions juxtapose soft and hushed, almost imperceptible, fragments with high and low frequencies, bursts, and static in an asymptotic process that cuts away from and deepens the nature of sound, finally achieving compositional focus in the spaces between them. Chartier was particularly drawn to the Grand Tonometer, feeling a distinct connection to Koenig’s approach to sound, and to his aim of a new, or enhanced, way of listening.

In a special live performance in the Ring Auditorium at Hirshhorn Museum and Sculpture Garden in Washington, DC on October 7, 2010, Chartier premiered the first version of a new work: Transparency. This performance was inspired in part by the Hirshhorn’s ColorForms exhibit, a collection of works by artists including James Turrell, Fred Sandback, and Olafur Eliasson, showcasing the use of abstract form to explore color’s evocative possibilities, from the purely optical to the metaphysical. Transparency is created from just some of the myriad delicate recordings made during his Fellowship of the Grand Tonometer, other large tuning forks, metal and wooden resonators, and wood organ pipes by Koenig and his contemporaries.

In late 19th-Century Paris, scientific instrument makers like Koenig were still referred to as philosophical instrument makers. It was possible for the public to visit their studios for musical/sound “séances”—gatherings in which the maker’s tools and materials would be presented for experiments and debate. Perhaps Transparency can be seen, in some ways, as a “sound séance” for a digital age.

Transparency (Performance) is intended as the first in a series of upcoming studio and installation works based on Chartier’s Smithsonian Artist Research Fellowship recordings.