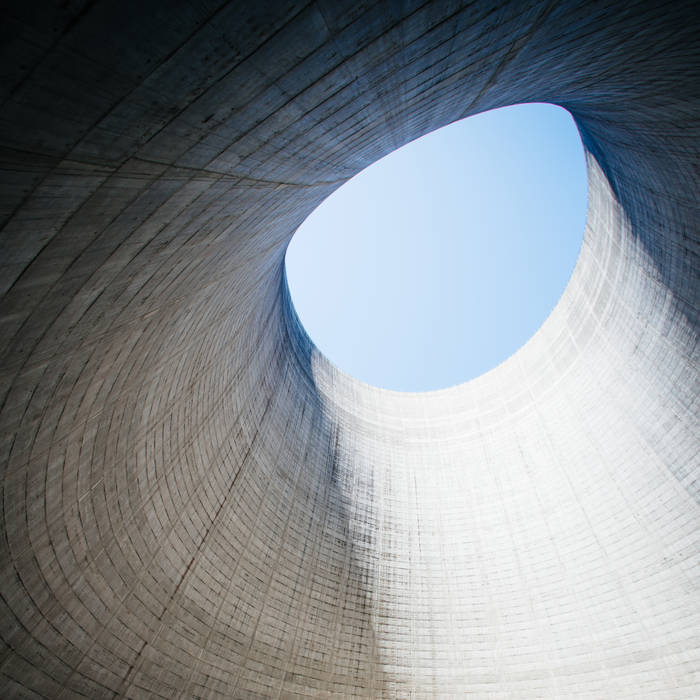 Dennis Albrecht Truly a weird one. Especially the first five minutes of the original work/excerpt have to be one of the most amazing minimalist adventures I have had in recent music. The atmosphere of the cover photo is 1:1 translated into audio material. Cold and clear air mixing with drops of condense water in a concrete monument. A simply amazing experience.

Michael Upton (Jet Jaguar) Fascinating to read the process and then listen to the result. That result is more like some mutant descendant of Chain Reaction's techno abstractions than what you might expect from any of Lucier's compositions, and it continues to sound like studio trickery as it evolves. The (actual studio) rework was a surprise, and just as enjoyable.

The other Christian McBride

About Satsop:
In the late 1970’s, the U.S. was more than 20 years into its nuclear power program. In Washington State, a consortium of public utilities began what was to be the largest single nuclear power project in the country’s history. Five reactors, divided between sites located near the cities of Hanford and Satsop were intended to be a solution to projected energy demands of the rapidly growing region.

The construction was suspended shortly before the facility was completed and what remains is a structure 129 meters across at the base, and rising to a height of nearly 152 meters with an uncanny acoustic quality. From 2004-08 a small team worked to open the space to artistic interpretation, recognizing within the space the interplay of site-specific sound, weathered industrial architecture and the natural environment.


About Loss Less:
In 2008 Kamran Sadeghi was selected resident artist at Satsop. Inspired by Alvin Lucier’s “I am Sitting In A Room” (1970)—Sadeghi amplified an original electronic music passage with a length of 2 minutes into the open aired structure and recorded the outcome of the tower's acoustic response. This recording was then re-amplified back into the structure and re-recorded. The process was repeated ten times, and with each cycle the natural acoustics of the tower began to reshape the original passage until it disappeared entirely. This approach captured the architectural integrity and holistic immediacy of the nuclear cooling tower while symbolically removing it’s entire existence.

The result is a unique 25 minute sonic experience full of audible artifacts that document space, time and our environment. The composition was created on location and in real-time, allowing all natural elements such as wind, rain, wildlife, resonance and feedback-distortion to be a part in the process and therefore the end result. No post production effects were used.

The ‘Rework’ version is a studio interpretation recorded live using samples of the original composition, processed through effects and used as a guide for added atmospheric electronic tones as counterpoint. The large throbbing bass drum pattern emphasizes the weight and physicality of the cooling tower, while recalling a sacred ceremonial chants or drums used to converse with or drive away destructive spirits.

The title ‘Loss Less’ is a play on the term lossless compression—a type of process that allows for the preservation and and perfect reconstruction of data (audio). In this case the audio was not preserved, but intentionally degraded. The title also taps into the reality of catastrophic loss and destruction caused by nuclear energy, and the call for less.

Kamran Sadeghi is an American (born Iran) producer and composer of electronic music based in New York who is constantly calibrating his creative process through multiple disciplines such as scoring for film, music for choreography, live performance, sound and video art and left-field club music. An autodidact who uses sound as a sculptural material and electronic instruments to create new worlds.

Sadeghi first gained recognition for his work under the alias Son Of Rose with multiple critically acclaimed records and live shows. During this time he performed with a grand piano and resonating the strings with magnets. This electronically prepared piano was simultaneously processed using custom made synthesis. His primary interest during this time was resonance, microtonality, electro-acoustics and granular synthesis.

In 2008 Kamran put the traditional output of making albums on pause to create multi-channel sound and expanded cinema performances. During this period he was awarded an artist residency producing work using the Nam June Paik ‘Wobbulator’, worked for composer Morton Subotnick and became an active member of one the first galleries dedicated to multi-channel Sound Art, Diapason.

His record production credits can be found on collaborations with Sasha Waltz, Patti Smith, Jean-Luc Godard, Berghain among others. His recordings are published on such labels as Sternberg Press, Vinyl Factory, LINE, Sacred Bones, Dragons Eye Recordings and Apollo Records and more.