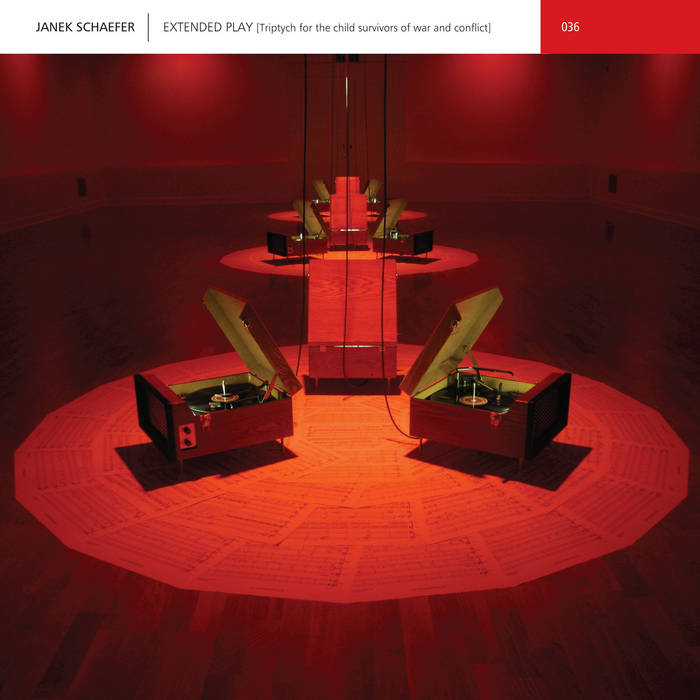 LINE is proud to release the latest audio work from British composer and installation artist Janek Schaefer based on his installation of the same title. Schaefer was awarded British Composer of the Year Award [Sonic Art] 2008 for Extended Play

Red is the colour of Life, of Death, and of Love. Scarlett, my first child, was born in 2005, and since then I have been very aware of how lucky we all are. I have been constantly comparing this to the fact that my mother was born in Warsaw in 1942 – the epicentre of World War II. How opposite can two beginnings be? This inspired me to produce the Extended Play installation, which continuously and positively celebrates hope and new beginnings, for child survivors in all situations around the world.

The original idea for the composition, came from learning about the ‘Jodoform’ system of secret musical messages, that were broadcast by the BBC World Service, during World War II. The music they played was given a particular meaning, which was interpreted by The Polish Underground. I discovered from the original Jodoform log book, that the lovely Polish folk song ‘Tango Lyczakowskie’, was broadcast on the day my mother was born. The song describes how children in 1918, had been forced to take up arms, in defense of their town. From this tune, I chose a short rising musical phrase, and with my arranger Michael Jennings, developed a ten minute score. Each of the three solo parts was then recorded separately, edited, and cut onto vinyl. In the gallery, 3 x Cello EP’s, 3 x Piano EP’s, and 3 x Violin EP’s are played at either 33, 45, or 78rpm using nine retro record players. These play continuously, and each was modified to stop playing briefly in response to the audience moving around the exhibition. This has the effect of changing and extending the composition, so that it is never the same again.

For the album, Tracks 1, 2, and 3 were recorded using these record players, with all the character of hearing their mechanisms, and time passing within the dusty grooves. Track 4 creates a nine part ensemble, layering the acoustic recordings of the instruments at various speeds. Track 5 is a collage incorporating ‘Tango Lyczakowskie’, recorded using a 1940’s radio.