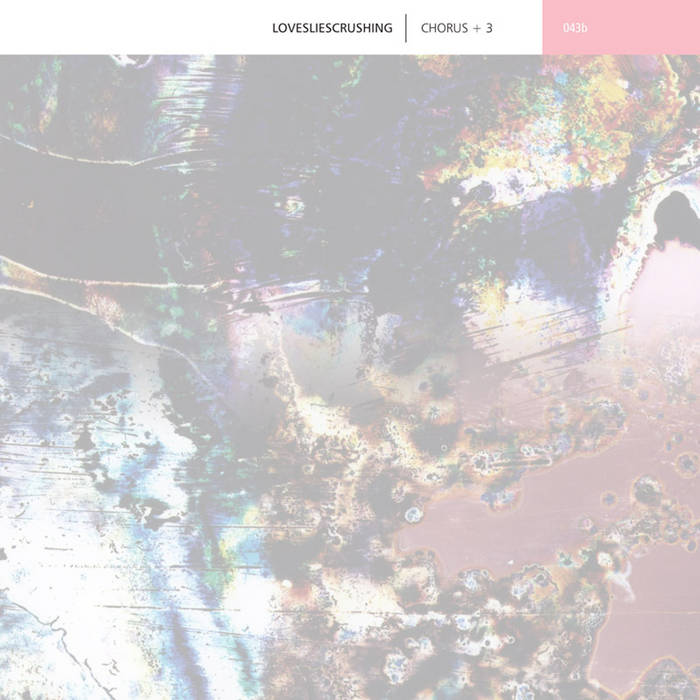 CHORUS + 3 (LINE_043b) is the full original 14-track CHORUS release plus 3 additional new reworks. CHORUS + 3 is the companion release to CRWTH(Chorus Redux) and is only available in digital format.

“Through their use of low tech means and focusing on the blending of guitar noise and electronic voice processing, Lovesliescrushing can be seen as the early ‘missing link’ between the likes of Slowdive and Fennesz. Their output has been consistently and beautifully crafted… works that contain an element of sonic mystery and still sound timeless. Lovesliescrushing is an important, if perhaps overlooked, point in the timeline of contemporary electronic music.” - Richard Chartier

ABOUT CRWTH / CHORUS:
The original release of CHORUS itself was inspired by a challenge… to make a Lovesliescrushing album abandoning Scott Cortez’ trademark guitar work and use only the voice. CHORUS was created by taking vocal tracks, deconstructing them via minimal processing, and turning them into new compositions.

The “voice as an instrument” was never truer than on CHORUS, because it is the sonic material for the music itself, exploding the songs into ghostly remnants of their origin, the human voice.

The original very limited edition was released only in Peru and highly sought after. In the process of trying to obtain a copy of this recording Richard Chartier contacted Cortez directly. After long discussions of the work of Lovesliescrushing, Cortez was asked by Richard Chartier to do something special for a LINE release and came up with an idea to revisit the tracks that comprise CHORUS. the concept behind CRWTH was to abstract even further upon an abstraction. CRWTH is a completely re-edited take on the material, not merely a remix album, but an alternate version of CHORUS, a redux.

all music composed, arranged and performed by lovesliescrushing.
voices and voice loops recorded between 1994 and 2001, arranged by Cortez in 2004.
tracks redrawn by Cortez, Summer 2009. remastered by Taylor Deupree, Fall 2009. Photos: Scott Cortez.